In this tutorial I'll demonstrate C2V, a fully automatic C to V source code translator, that has just been released.

We'll run some simple examples and then translate the entire original DOOM, the legendary shooter, the first ever 3D game released in 1993 and open sourced in 1997.

A video version of this tutorial is available on YouTube:

First, We have a simple C program that prints prime numbers. It's a small program, but it has some of the most widely used language features: function definitions, control flow via for loops and if conditions, a libc function call, and various expressions.

We can translate the C file to V by simply running

It will create primes.v with the following contents:

This is a valid V program, and running it will give us the same result.

This code is pretty similar to the original, you can notice one major difference. C allows one statement code blocks without brackets, and V doesn't, so in the translated code all blocks are explicitely marked with brackets.

For many projects it would make more sense not to translate the entire C code base, but just to generate V wrappers on top of C APIs.

For example, let's say you have some complicated crypto or networking library in C with lots of functions and types, and you don't want to manually type their definitions in V.

For this C2V has a wrapper mode.

We have a simple file usersapi.h. By running v translate -wrapper usersapi.c we get usersapi.v with just the function definitions. Function bodies are skipped.

C doesn't have modules, so in most C libraries all functions start with the same prefix, the name of the virtual module. C2V helpfully strips those prefixes and generates nice clean wrapper functions that can be called with usersapi.create_user() instead of usersapi.usersapi_create_user()

Perhaps in the future C2V will translate C strings (char pointers) to V strings as well.

All right, this works, and it's nice, but these are very trivial examples. Let's try something a lot more fun, like the DOOM game.

We think it's very important to have large functioning examples to demonstrate the power of the tools but also to have something to test via CI to avoid regressions. During V's release we had lots of various examples, now for C2V we have DOOM. This is the primary test of C2V.

DOOM is a very complex project that uses some really tricky elements of the C language. And making sure C2V can always handle DOOM not only serves as a good C2V test but also as a test of the V compiler itself, since it can run entire DOOM in pure V.

First let's download the DOOM source and build it to make sure everything works. The original 1997 open source release doesn't work nicely on modern OSs, so the community has been working on different forks. I'll be using Chocolate Doom, it's one of the most popular forks, and its goal is to be as close to the original as possible (they even keep the original bugs).

The main difference in this fork is using SDL for cross platform rendering, so we'll need to install SDL2 before we can build it.

A great thing about DOOM is that it has a very simple structure and is easy to build. It's just a bunch of C files that are compiled into object files and are later linked into a single executable.

To build the C version:

Great, as expected, it all works, now let's translate it to V and try to build that.

In the previous example we translated a single file, this time we'll translate an entire directory.

This creates a new directory src/doom/doom_v/.

And we can use any name we want, there's a c2v configuration file.

It has a bunch of files translated from C to V.

We can open any file, for example g_game.c and verify that it is indeed DOOM code translated from C to V. It's also been nicely formatted by vfmt.

I'll explain what we have in the shell script a bit later.

The script compiles into the src/doom/doomv binary. Everything works. We have the music, we can watch the demo, go to the settings, start the game, walk around and shoot enemies.

There's a slight rendering bug at the bottom, but it can be cleaned up by pressing tab twice and forcing a re-render.

There's a bug somewhere in C2V, it has just been released and needs some fixes.

Now let's look at those shell scripts and see how we built the V translation of DOOM.

C2V doesn't understand makefiles yet, so we have to do things manually.

In the future making such scripts won't be necessary.

Since doom uses C libraries like textscreen, pcsound, and opl, and we are only translating doom itself, we need to build doom.o and then link it with the rest of object files.

The first line compiles all V files in doom_v/ directory into a single doom.o object file. -translated tells V that the code was translated from C, so the compiler is less strict. For example it allows using i++ as an expression (in V it always must be a statement). In the future C2V will be able to translate such C expressions into valid V code, and -translated will be removed entirely.

After generating doom.o, we can compile the entire project.

The second line links it with the rest of the object files.

Here we have the shared library used by other games in the chocolate doom project: Hexen, Heretic, and Strife.

In the near future we'll also translate all these C libraries DOOM depends on, and this shell script and interacting with the C compiler won't be needed. The entire project will be runnable with a simple v translate src/doom && v .

One other thing I wanted to do is to show you that it actually is V code we are running.

Let's go to p_enemy.v and modify the P_Move function. We can add a simple println with some V specific code, like a reversed V array.

Let's rebuild it and run again. As expected, we're getting our array printed every time an enemy moves.

We translated the entire project. But sometimes it may be better to do more gradual transition from C to V. For example, if you want to move your project from C to V, you might prefer doing it slowly and carefully, file by file. After each file migration you can run tests and see if your application runs correctly.

You can do that with c2v. All you need to do is just translate a single file, generate an object file, and replace your current C object file with the new V object file.

We can do this with DOOM too. In fact that's how we made the entire thing work. We were doing it for every single file, one by one, fixing compilation errors, bugs in C2V, and runtime bugs.

It is actually amazing how well it all works considering there have been two translation processes. From C to V via C2V and then From V back to C again via the V compiler.

In fact we can actually look at the generated C code after all the translation and compare it to the original. Very clean and barely changed: 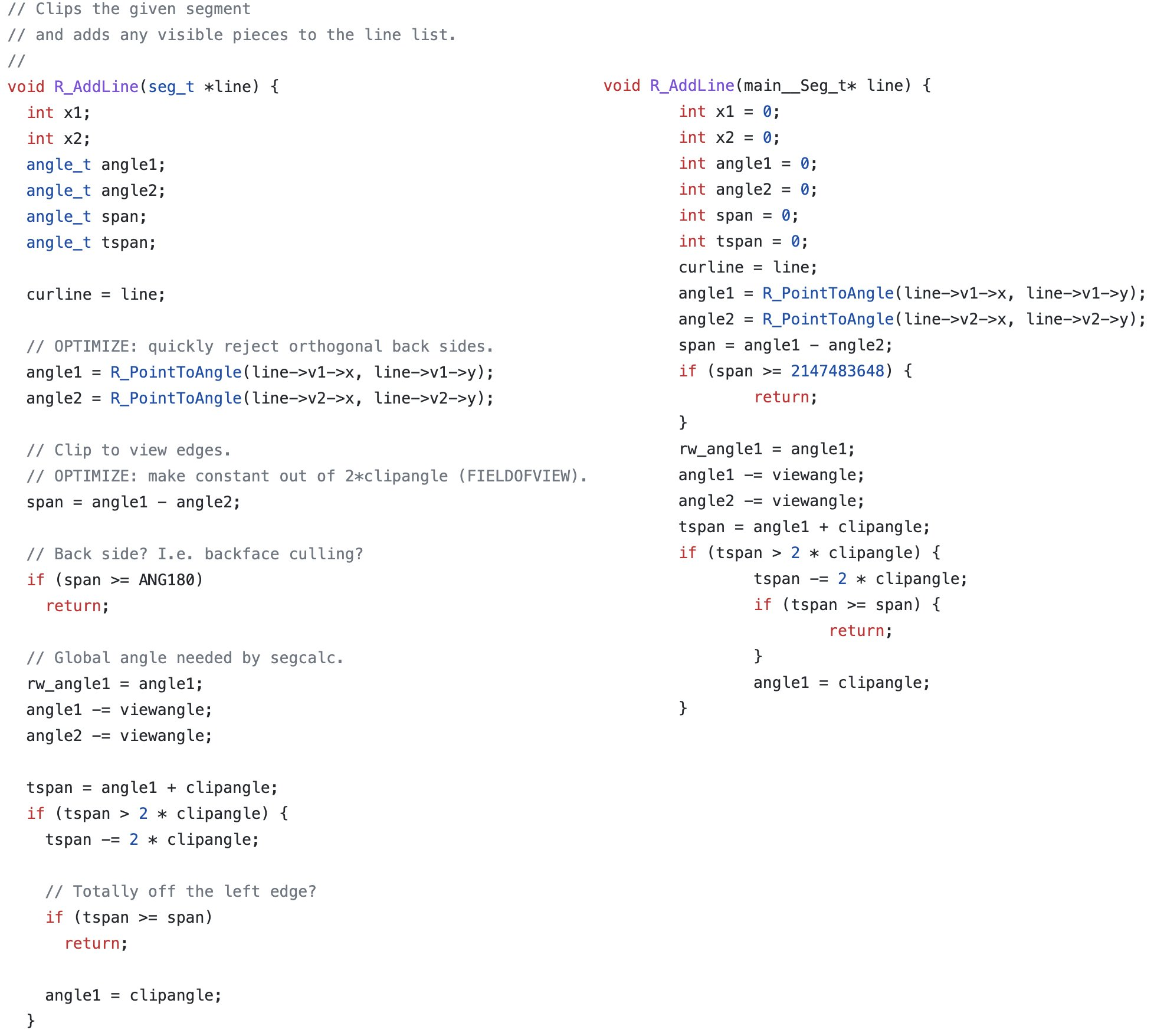 The comments and C defines are missing right now, that's obviously something very nice to have, so they will be translated as well.

C2V has just been released on June 22th 2022, so it's going to mature with the help of the community. With bug fixes and new C features supported, it should support the entire C standard soon. Luckily C is a relatively small language. Any kind of software written in C will be translatable to V fully automatically.

I will also be publishing the same demo with Sqlite and Quake translation.

It's a huge milestone for V and gives V developers access to huge amounts of software written in C.

We're very excited about this release.